Season Subscriptions and Other Discounts!

Don’t miss a single hilarious, heart-warming, thought-provoking, hard-hitting moment! We’ve got seven amazing shows lined up for you; a Season Subscription ensures that you’ve got a ticket for each one!

We at KOA believe that theater should be accessible to all — help put a little goodness back into the world by participating in our “Pay It Forward” ticket program!  You buy a ticket and donate it to our pool, where it will be redeemable by anyone in the community for any of our shows.

(Pay for 2, get 3! or Pay for 4, get 5!) Can’t choose who to invite out for a theater night? Invite them both! Or make it a party of five! Or heck, keep all the tickets for yourself and put together a mini season subscription! You do you; we won’t judge.

For KOA’s 5th Season, we are proud to present 7 plays, all written by women, all of them Hawaii premieres! 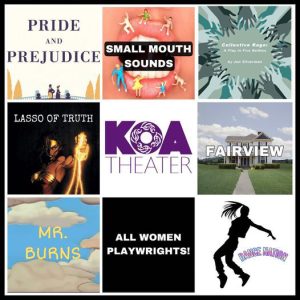 This isn’t your grandmother’s Austen! Bold, surprising, boisterous, and timely, this P&P for a new era explores the absurdities and thrills of finding your perfect (or imperfect) match in life. Adapted with fizzy, festive freedom, and full of slapstick and barely controlled chaos!

In the overwhelming quiet of the woods, six runaways from city life embark on a silent retreat. As these strangers confront internal demons both profound and absurd, their vows of silence collide with the achingly human need to connect. Filled with awkward and insightful humor, Small Mouth Sounds is the unique and compassionate new play that asks how we address life’s biggest questions when words fail us. 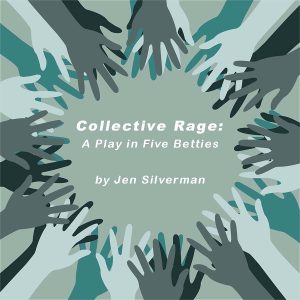 Collective Rage: A Play in Five Betties by Jen Silverman.

Jen Silverman’s hilarious play, which The New York Times called “a fult-tilt lesbian/bi-curious/genderqueer/Shakespearean comedy for everyone,” explores anger, sex, love and the “thea-tah” through the the experiences of five women named Betty. Due to graphic language and sexual content, this show is recommended for audience members 18+.

“A perfect balance between the really absurd and the absurdly real.” – Broadway World

Lasso of Truth by Carson Kreitzer, directed by Kevin Keaveney

Inspired by the amazing tale of Wonder Woman’s real-life genesis, Lasso of Truth explores the knotty origin story of our preeminent female superhero, created by William Marston, inventor of the first lie-detector machine. This smart, seductive, wild ride features the two women Marston lived with in a polyamorous relationship – both of whom inspired the famous character – plus a girl in search of answers about her childhood heroine, and a guy trying to hold on to his prized first issue.

Winner of the 2019 Pulitzer Prize for Drama. At the Frasier household, preparations for Grandma’s birthday party are underway. Beverly is holding on to her sanity by a thread to make sure this party is perfect, but her sister can’t be bothered to help, her husband doesn’t seem to listen, her brother is M.I.A., her daughter is a teenager, and maybe nothing is what it seems in the first place…! Fairview is a searing examination of families, drama, family dramas, and the insidiousness of white supremacy.

After the collapse of civilization, a group of survivors share a campfire and begin to piece together the plot of The Simpsons episode “Cape Feare” entirely from memory. Seven years later, this and other snippets of pop culture (sitcom plots, commercials, jingles, and pop songs) have become the live entertainment of a post-apocalyptic society, sincerely trying to hold onto its past. Seventy-five years later, these are the myths and legends from which new forms of performance are created. A paean to live theater, and the resilience of Bart Simpson through the ages, Mr. Burns is an animated exploration of how the pop culture of one era might evolve into the mythology of another.

Finalist, 2019 Pulitzer Prize for Drama. Somewhere in America, an army of pre-teen competitive dancers plots to take over the world. And if their new routine is good enough, they’ll claw their way to the top at Nationals in Tampa Bay. A refreshingly unorthodox play that conveys the joy and abandon of dancing, while addressing the changes to body and mind of its preteen characters as they peer over the precipice toward adulthood.